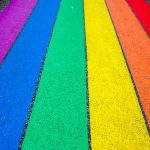 VANCOUVER, British Columbia — The Women’s World Cup began uncertainly for midfielder Carli Lloyd. But it quickly built toward predatory dependability, then concluded Sunday in a display of startling deliverance.

Lloyd scored the quickest goal in a Women’s World Cup final, slicing a shot with the outside of her left foot from a corner kick in the third minute of a 5-2 victory over Japan, as the United States became the first team to win the tournament three times.

Lloyd was far from done, becoming the first player to score three goals in the final of this tournament. All came in the first 16 minutes before an ecstatic announced crowd of 53,341 at BC Place Stadium, including Vice President Joseph R. Biden Jr.

The United States built a 4-0 lead, was never really threatened as Japan closed the gap to 4-2, and found redemption after losing to Japan in a penalty shootout in the final of the 2011 Women’s World Cup.

In the fifth minute, Lloyd ran onto a back-heel pass from Julie Johnston after a free kick and placed a shot between the legs of a Japanese defender. And in the 16th minute, in an act of great audacity and accuracy, Lloyd launched a shot from midfield. 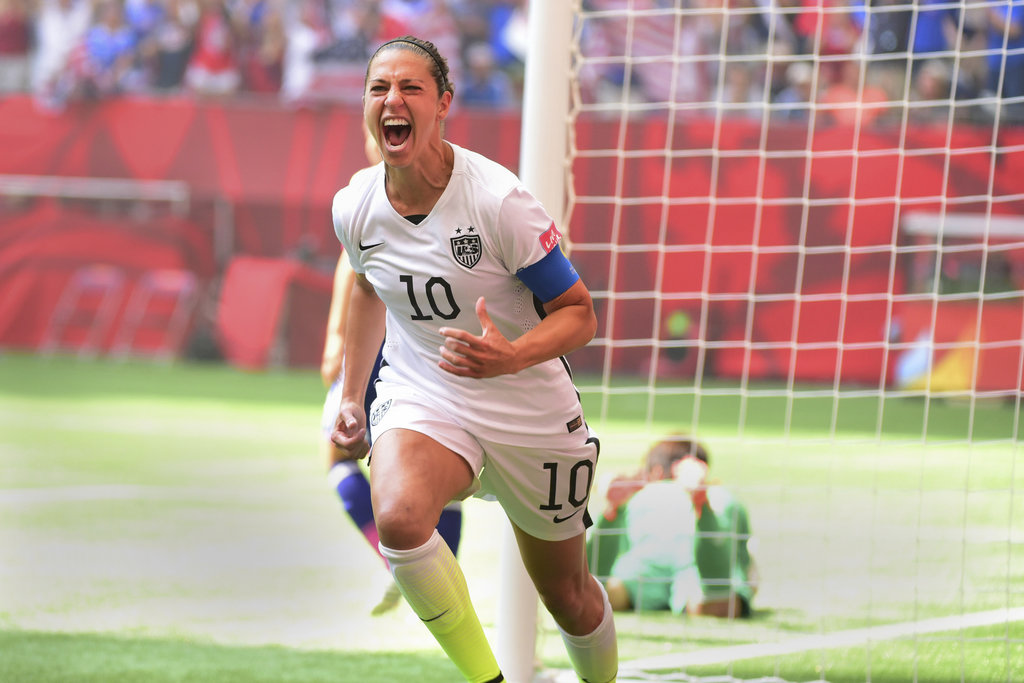 Ayumi Kaihori, the Japanese goalkeeper, was caught off her line. Backpedaling furiously, Kaihori could only reach futilely with her right hand as the ball deflected off the left post into the net, giving the United States a 4-0 lead.

While training alone before the tournament, Lloyd, who relies often on visualization techniques, saw herself scoring four goals in the World Cup final, she said. She came up just short but said that she was so intent as the game opened, “I feel like I blacked out for the first 30 minutes or so.”

Norio Sasaki, Japan’s coach, quickly got a sinking feeling as his highly organized team was left in tatters. He had seen this before. At the 2012 London Olympics, Lloyd scored both American goals against Japan in a 2-1 victory in the gold medal game.

“She always does this to us,” Sasaki said after the game. “We are a bit embarrassed. She is an excellent player. I really respect and admire her.”

As the World Cup began, though, Lloyd had faced critical remarks from Pia Sundhage, a Swede who coached the United States at the 2011 World Cup and to gold medals at the 2008 and 2012 Olympics.

Lloyd had also been ineffective playing a more defensive role in midfield. But Coach Jill Ellis changed her tactics in the knockout rounds, and Lloyd pushed into the attack with freedom and inventiveness.

Lloyd had called for the team to take more chances, and Ellis had assured her: “Don’t stress it. We’re going to find a way to get you going.”

Lloyd said before the final, “I knew my time was going to come.”

Her three goals Sunday gave her six in the final four games for the Americans. Lloyd was awarded the Golden Ball as the World Cup’s most outstanding player. 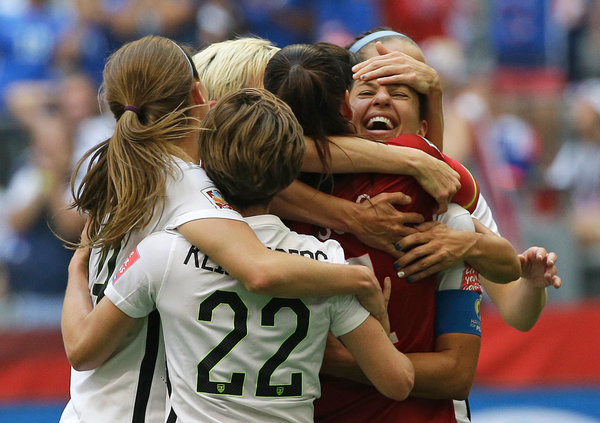 American players after Carli Lloyd scored her third goal of the game to put the United States ahead by 4-0.

These are the moments she lives for, said Lloyd, who will be 33 next week and has overcome a lack of fitness earlier in her career. “I’ve dedicated my whole life to this,” she said. “The mental game is an absolute huge thing.”

Sunday’s victory also provided a valedictory moment for Abby Wambach, 35, who is international soccer’s leading career scorer with 183 goals but had never won a World Cup. Wambach accepted a lesser role as the tournament progressed, and Lloyd became more assertive and productive.

The United States conceded its first goals on Sunday since its opening match, including an own goal by Johnston in the 52nd minute that drew Japan to 4-2. But Hope Solo reasserted herself in this tournament as perhaps the world’s best goalkeeper, despite a lingering domestic abuse scandal.

This team possessed the same qualities as the American champions from the 1991 and 1999 World Cups: depth, confidence, selflessness, athleticism, stamina, indefatigable spirit.

In 1999, the Americans prevailed in a penalty shootout against China as 90,000 fans crammed into the Rose Bowl in Pasadena, Calif. That tournament was as much a movement as a sporting event as women’s soccer came into the mainstream.

Mia Hamm embodied all the athletic possibilities of the antidiscrimination law known as Title IX: a college scholarship, accomplishment, respect, financial security, celebrity. She seemed to transcend gender and was considered simply a soccer player, not a women’s soccer player.

The magazine cover photos of Brandi Chastain celebrating after her decisive penalty kick in 1999 became one of the most iconic depictions of a female athlete — pure exultant strength.

“That was a cause, a passion,” said April Heinrichs, a star forward on the 1991 World Cup team and coach of the 2003 team. “The players who were involved did the heavy lifting in promoting and marketing, along with the playing and educating. This era is about the technical and tactical aspects of a game that has evolved so far in 16 years.”

The evolution of the game by 2015 was evident in the scrutiny and early criticism of Ellis’s lineups and tactics, which tended toward caution during group play.

“We’re talking about them as athletes, rather than some of the conversations we had in ’99 — ‘My God, who are these women? They’re kind of hot!” said Julie Foudy, a star midfielder on the 1999 team.

The 2015 Women’s World Cup expanded to 24 teams from 16. International parity was displayed as Colombia defeated third-ranked France, England reached the semifinals and Cameroon advanced to the round of 16. Women are playing in professional leagues around the world. The game is faster now, more skilled, vital in the transitional moments between defense and attack.

As opponents have grown stronger, though, the Americans have maintained their standing with three consecutive Olympic gold medals and two consecutive appearances in the World Cup final, capped by Sunday’s victory.

“Our benchmark is winning,” midfielder Megan Rapinoe said. “I would think we would have to be considered one of the best teams there ever was.”

This American team also reflected social changes in the United States in the new century. Ellis, Wambach and Rapinoe are openly gay, and they spoke in a celebratory way when the Supreme Court legalized same-sex marriage late last month.

“Our players, they’re great role models,” Ellis, 48, a native of England and now an American citizen, said when the ruling occurred. “And to have it now be something that all of us can embrace, no matter where we live in the country, it’s a tremendous step.”

The United States, which also received goals from Lauren Holiday and Tobin Heath on Sunday, entered the championship match with assurance tempered by the despair of the World Cup outcome four years ago.

On July 17, 2011, in Frankfurt, the Americans twice held a lead against Japan only to lose on penalty kicks. A victory over Japan to win a gold medal at the 2012 London Olympics did not provide full restitution.

As the tournament opened, Lloyd faced stinging comments from Sundhage, the former American coach. Sundhage told The New York Times that if Lloyd felt the coaching staff had faith in her, she could be one of the best players on the team. If not, Sundhage said, Lloyd could be “one of the worst.”

Lloyd called the remarks untrue. And Sundhage, who now coaches Sweden, later clarified her comments, calling Lloyd “one of the most important players I’ve ever had.”

Lloyd did not always listen to what she was told, Sundhage said, but that was not necessarily a bad thing.

“Some players are very challenging,” Sundhage said, “and those players create gold.”

After the semifinals, Lloyd said she no longer thought about Sundhage’s remarks, adding, “I’m not sure what she would say now after all these games; it’d be a good question to ask her.”