Pollstar- Concert Reviews To Help You Make Those Hard Decisions

Concert Reviews To Help You Make Those Hard Decisions

Taylor Swift in Louisville – “Her blazing hit ‘Welcome to New York,’ kicked off the night. A dozen or so male dancers swinging off city street lamps behind her, the glitzy pop star looked hip as hell.” – Louisville.com/Ashley Hoff

Tyler, The Creator in Oklahoma City – “Hundreds of fans greeted him with middle fingers, underwear and even a complimentary weave.” – TheOklahoman/NewsOK/Nathan Poppe

Rusted Root / The Wailers in in Reading, Pa. – “It was the kind of show where a guy who collided with another patron after dancing through the aisles could offer a high-five and be on his way.” – Reading Eagle/Jon Fassnacht

Lana Del Rey in Montreal – “It’s during the slower songs like ‘Brooklyn Baby,’ ‘Video Games’ and her cover of Leonard Cohen’s ‘Chelsea Hotel No. 2’ that Del Rey truly took control of the stage and kept the crowd guessing on which slight liberties she may take while performing her songs live – a faster pace here, a lower pitch there. All subtle, but worth the quiet.” – Montreal Gazette/Mick Mick Côté

The Tallest Man On Earth (Kristian Matsson) in New York – “In his sold-out concert at the Beacon Theater on Wednesday, he used every inch of his long guitar cord to roam the stage: darting around, crouching, stretching, hip-twitching, perching briefly and jittering away, but always ending up back at the microphone when he had more words to sing.” – The New York Times/Jon Pareles

Noel Gallagher’s High Flying Birds in Cleveland – “Throughout, Gallagher alternated between an impressive array of acoustic and electric guitars; however, his voice sounded as pristine as it did when Oasis started in the early ’90s.” –CleveScene.com/C-Notes/Annie Zaleski

Bette Midler in Vancouver, British Columbia – “Her show is an amazing spectacle full of glitz, glamour, cool set pieces and a 12-piece band, but it’s virtually impossible to take your eyes off of Midler for even a second.” – VanCityBuzz.com/Rob Feller

Take That in Sheffield, England – “There may be only three members of the band remaining but the boys – Gary Barlow, Mark Owen and Howard Donald – are still as fabulous as ever.” –  Derby Telegraph/Kerry Ganly

The Rolling Stones in Columbus – “It was more than rock ‘n’ roll. It wasn’t a farewell tour or a final goodbye. It was a friendly ‘hello.’ It was an invitation to witness history with rock ‘n’ roll’s greatest band. It was two hours and 15 minutes of hard driving blues that rattled bones and cleansed souls. It was a dream come true.” The Post/Charlie Hatch 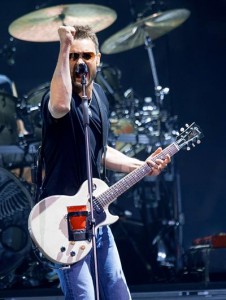