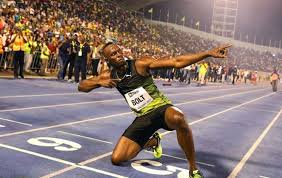 Usain Bolt may be the fastest man in the world, but he could not outrun a positive Covid-19 test. Bolt turned 34 on August 21st and celebrated his day with a party over this past weekend. It was reported that the party was a “mask free” event which further explains his positive test result. Bolt has been self isolating since his birthday in his home in Jamaica.

The Jamaican health ministry confirmed on Monday that Bolt did in fact test positive after taking to social media earlier that day that he was awaiting results. “Just to be safe, I quarantined myself and just taking it easy,” Bolt said in the video while lying in bed. Bolt is a retired olympian who holds records in the 100 meter and 200 meter events. He is the only sprinter to win gold in three consecutive Olympics (2008, 2012, 2016). He retired his racing shoes in 2017. After being tested for Covid, he then confirmed that he did not have any symptoms of the virus.

Fans all over took to social media to wish Usain a speedy recovery, suggesting remedies such as ginger tea to help. Jamaica’s cases have been on the rise in the past four days with more than 60 new cases a day. This is gone up 6x with new cases being as low as 10 per day a few weeks ago. Jamaica has 1,612 confirmed cases, with 622 active cases and 16 deaths. They believe that the rise in number has been a direct result of the borders opening in the beginning of August as well as people refusing to socially distance and wear masks.

Bolt is added to a long list of professional athletes and celebrities that have contracted the virus in 2020. We wish him a quick recovery and urge everyone to practice social distancing and take all precautions necessary to avoid getting Covid-19.