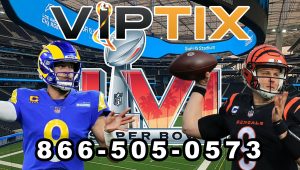 VIPTIX is announcing that they are moving towards a no Super Bowl service fees pricing structure. 29-year ticket industry veteran breaks down Super Bowl tickets supply and demand.

“There are so many variables that affect Super Bowl ticket prices in the secondary market,” says VIPtix.com President & CEO Nick Giammusso.

Super Bowl LVI ticket prices aren’t always as affordable as they may seem on many ticketing websites. That’s because not all surcharges or service and convenience fees are included in the initial published price.

VIP Tix hopes that one day transparent pricing will be the golden standard in the ticket industry.

VIPTIX, is a ticket marketplace in the secondary market. Prior to Covid, the industry was predicted to grow to 15.19 Billion dollars in 2020. That’s right, FIFTEEN BILLION! It’s a marketplace that is becoming more and more transparent in recent years. There has always been a need to buy and sell event tickets.

Savvy consumers now have a choice when shopping for tickets. Buyers and sellers have found these online marketplaces to be efficient and safe to buy and sell event tickets online. Super Bowl ticket service fees can be in the thousands of dollars.

“VIP Tix will continue to offer their clients the best prices in the industry and now with no hidden fees. The price you see is the price you pay.” said company President & CEO Nick Giammusso.

Prices for this year’s Super Bowl are starting at $6,000 and up. Will prices rise or fall leading up to the big game? Let’s take a look at last year’s game and the current supply and demand in LA.

Last year, just days before Super Bowl LV, ticket availability quickly dried-up in the secondary market as fans (mainly Buccaneers fans) whom were already there waited for prices to drop. Prices went through the roof at $6,500 and up just days before the game.

Again, this year fans will make the trip to LA without Super Bowl tickets in hand. “For good reason, we are advising our clients for this Super Bowl to purchase their game tickets, as prices are expected to ease a bit and then rise significantly just days before the game,” says VIP Tix President & CEO Nick Giammusso.

VIPSuperBowlTix.com has a warning for those fans who want to wait last minute to buy Superbowl tickets and arrange their travel to Los Angeles. The cities of Cincinnati and Los Angeles are excited to be competing in this year’s big game. Corporate entertainment budgets nationally, and now especially in Cincy and LA, are fueling Super Bowl ticket prices in LA. Even small companies expect to spend six figures bringing clients and top executives to the Feb.13th Super Bowl at SoFi Stadium prompting a scramble for tickets, hotels, hospitality and airfare.

You’d be wise to heed the advice of VIPSuperBowlTix.com and make your Superbowl ticket and travel reservations early. VIPSuperBowlTix.com has been heeding their own advice and scooping up any Super Bowl tickets they can get their hands on in anticipation of this increased demand. “Although we have the most affordable Super Bowl LVI packages on earth, we increased our ticket and hotel package prices by about 20 percent in comparison to last year’s game. Unfortunately, we have to predict the future,” says Nick Giammusso President of VIPtix.com Here’s why we’re prognosticating that Super Bowl tickets will be drying up in LA. It’s Economics 101.

Let’s start with Supply. “The Superbowl game of course will be played at SoFi Stadium which has a seating capacity that will be expanded to 100,000 for this mega event. In comparison, last year’s Superbowl, which was held at Raymond James Stadium in Tampa, had seating for 75,000. Using simple math, one can see that supply of Superbowl tickets will be approximately 25,000 (or 25 percent) more than last year’s availability,” says VIP Tix President & CEO Nick Giammusso. Read on.

Demand. This year’s Super Bowl demand on tickets, hotels, hospitality and airfare can be described in four words: Hometown Team and History. LA is a big NFL market. Additionally, LA fans do not have to pay for airfare and hotels. Cincinnati fans have been waiting for a Super Bowl appearance since 1988-89 season, where they lost to the San Francisco 49ers, 20-16.

Event planners and ticket brokerage companies say LA is whipping up more West coast corporate demand for Super Bowl tickets than usual. It’s been six (6) years since the Super Bowl has been played out West. The last West Coast city to host a Super Bowl was San Francisco way back in 2016.

Though most firms plot out their Super Bowl spending months in advance, some football fans wait to see who will actually be playing.

“There are so many variables that affect Super Bowl ticket prices in the secondary market,” says VIP Tix President & CEO Nick Giammusso.

One such variable that cannot be ignored is the state of the US economy. As inflation grips the nation with higher prices, there has also been a significant boom in the housing market. We have also seen a historical rise in the stock market the last few years which has cooled lately with the expected rise in interest rates. Will Super Bowl ticket buyers balk at ticket prices that will start at $6,500 per ticket and complete travel packages that run $10,000 and up?

What will the effects of Covid-19 have on demand? There is a mandatory vaccination and mask requirement at SoFi Stadium. How will these restrictions effect demand?

“So far, our pre-game Super Bowl tickets and package sales are up 20 percent in comparison to last year, says Nick Giammusso. However, 75% percent of our Super Bowl business is transacted after the two teams qualify and just fourteen days before the game.

About VIPtix.com/ VIPsuperbowltix.com
A Buffalo, New York privately held ticket and travel Company that specializes in providing sports, concerts and theatre tickets and/or entertainment travel packages to major ‘hard-to-get’ events. VIPsuperbowltix.com has provided its services to individuals, groups, corporations, travel agencies and concierge service companies worldwide through its website, telephone, e-mail and live one-on-one chat. The company was founded by Nick Giammusso, who started the company from the basement of their parents’ home in 1993. Before starting VIP Tix, Nick Giammusso was Director of Marketing and Ticket Sales for Prime Seats, Inc. a national ticket company that operated in the Northeast. Today, VIP Tix has established itself as a major player in the secondary ticket market and also that of the entertainment travel industry. For more information, please visit VIPSuperBowlTix.com

Picture this, the Buffalo Bills clench the division for the first time in decades with a 12-4 record. They defeat the 6-time Super Bowl champs, the New England Patriots both at home and away and watch as their fans long for the days of Tom Brady and Rob Gronkowski. Josh Allen is in the running for offensive player of the year and Sean McDermot is a shoo-in for coach of the year. After being knocked out in the wild card game 2 out of the past 3 years, the Buffalo Bills are hungry for the victory. Now, picture all of this happening during a fanless season.

Buffalo, NY is known for great food, friendly neighbors, and a lot of crazy snow. But one of the city’s most notable attributes is their diehard commitment to their sports teams, even through countless losing seasons. The Bills Mafia’s loyalty has been tested through a 17-year playoff drought, many sub zero Sunday games and constant losing seasons. Despite this, Bills fans have never wavered in their love and support for their team. They have been voted the best fans in the league in spite of these hardships.

What would Buffalo, NY look like if these diehard fans were not allowed inside Raymond James Stadium in Tampa to watch their Buffalo Bills fight for the coveted title of Super Bowl Champs? The City of Good Neighbors would band together to support their teams. They would have jumbo screenings on every building in the city. The bars would be overflowing with supporters. They would cheer together and cry together. All differences would be set aside as the city would come together to support their team. Win or lose, fans would be at the airport after the game cheering on Josh, Sean and the rest of the squad. If the Buffalo Bills were to come out on top and the fans could not be in the stadium to see it, there would be one thing on the minds of the Buffalo community…let’s do it again next year!