False Positives in the NFL

Sunday morning at 2:51 am, the Chicago Bears NFL coach Matt Nagy received a phone call. Knowing that any call at that hour would mean trouble, Nagy braced himself for what he was about to hear. He listened as Andre Tucker, the Bears infection control officer told him about members of his team that tested positive for Covid-19.

Being one month into training camp, Nagy was both shocked and disappointed as he received the new cases on his team. These cases would question the teams ability to play and also question the likelihood of the 2020 regular season to start. After being so careful during the duration of the Bears training camp, Nagy pondered how this could have happened to his team. According to ESPN, Nagy said “My initial, five-second gut reaction when I was told was just pure disappointment and frustration. It’s hard when you hear that, because everyone is doing such a great job of doing everything that we possibly can in our control to prevent stuff like this. When you hear this, you think, ‘Wow, what’s next?'” he continued.  Little did he know, 10 other teams across the league were experiencing the same horrifying phone call and dilemma.

The NFL was faced with a crucial situation as 77 tests across the whole league came back positive. They started to question whether the season would happen with this many confirmed cases. Not to mention all of this chaos took place before the start of the season. The NFL was planning for the worst when they realized that all 77 tests had come from the same lab in New Jersey. These positive tests were then tested again and each and every one came back negative. The NFL’s health and safety team announced that the tests were indeed false positives. The whole league let out a sigh of relief as the future of their season got a whole lot brighter. Many coaches admitted to being happy this happened now rather than during the regular season. Positive testing like this would have sent the league into turmoil. Once a player tests positive, they will be immediately isolated. Because of this mishap, the NFL has announced that every positive test will be followed by two more tests — one a traditional polymerase chain reaction (PCR) and the other a rapid-response — in a 24-hour period. If both return negative, the individual is reinstated to the team facility.

All precautions are being taken to limit the amount of players and staff to contract this Covid-19 virus. The NFL is doing their best to put into place rules and regulations to eliminate any further cases to occur. These false positives shook the league and made them reevaluate their testing procedures. The league, the players, the staff and the fans all hope to remain safe and have a successful 16 game regular season this year! 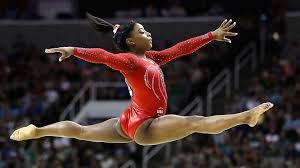 her first Olympic debut in 2016, Simone Biles has been a household name all across the country. She, along with hundreds of other athletes, were gearing up to partake in the 2020 Olympics, but due to Covid-19 The Games have been postponed until 2021. Biles recently opened up on TODAY to speak about her training for these games as well as racism and the very public abuse cases from former USA Gymnastic Doctor Larry Nassar.

23 year old gymnast Simone Biles is the most decorated female gymnast of all time being a four time Olympic Gold Medalist. She hoped to continue her success in the 2020 Tokyo Olympics, but her dreams were put on pause with the worldwide spread of the coronavirus. The Games have been rescheduled for 2021 in Tokyo. She told The TODAY  Show that she has been continuing to “train as if” with the hopes of keeping her dream alive. She continued “training has been a little bit different,” with gymnasts’ schedules staggered and all staff wearing masks. The gyms are staggering their athletes’ practice times and allowing ample time for the mats and equipment to be cleaned in between athletes.

Biles then went to talk about her appearance on the cover of Vogue’s August issue where we also opened up about her experience with racism and Black Lives Matter. She recalled her first personal experience with racism to be in 2013 at the World Championships when the headlines reported on an Italian gymnast whom Biles beat saying “Maybe next time we’ll paint our skin black so we can win” rather than her victory. She continued to comment that most if not all athletes of color have experienced something similar to this in their life or career. Simone also spoke a bit on her mental health and her experience with former USA Gymnastic Doctor Larry Nassar. She stated that therapy has helped in her recovery from the trauma of being abused by Nassar. She continued to speak on how therapy was good for her stating,  “now, I look forward to therapy because it’s a safe outlet for me, and I hope everyone feels comfortable and confident speaking out.” Nassar is sentenced to up to 175 years in prison after pleading guilty to sexually abusing 10 minors in 2018.

Biles is hopeful that her 2021 Olympic dreams will continue amidst all the craziness. We look forward to watching Simone, along with all the other athletes compete in Tokyo next summer!